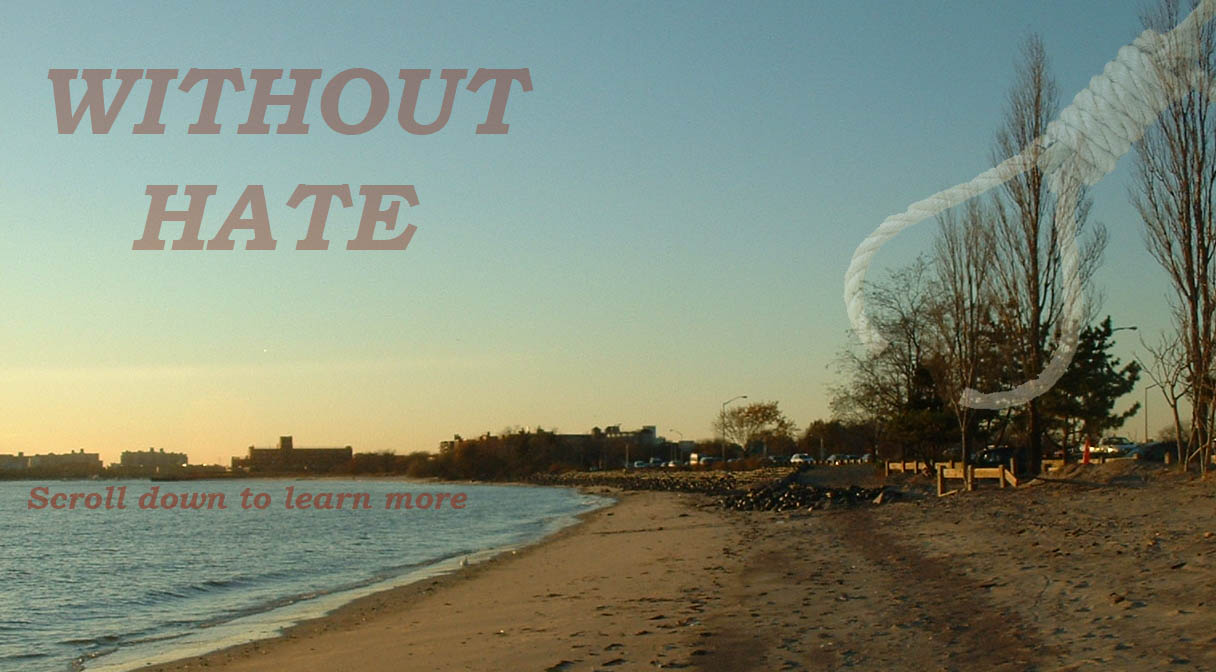 Playwright and WGA Screenwriter Eric Zaccar himself became the subject of much debate in the press when he was literally drafted into the middle of this real life urban drama, that he turned into a powerful and compelling screenplay.  The screenplay and Design Catcher Productions LLC, a small young company formed to produce independent features, found some start up money, quite a bit of significant talent came on board but business and financial setbacks have placed the project on temporary hold.

WITHOUT HATE dramatizes the true, topical, politically charged and controversial headline story of a hate crime that wasn't a hate crime, and a jury foreman who set out to prove that four young men from an old school Brooklyn neighborhood didn't deliberately lure a gay man from an internet chat room to his death.

The idea of producing the film independently, without any help from the established industry, has been all but abandoned.  As many people in the business have repeatedly said, our compelling true story of a hate crime that wasn't a hate crime would be ideal for HBO, Netflix or a comparable station.

Rather than update this website to the present tense, the following passages will be left as they were, when the project was in full swing.  Sadly, the eminent Frank Vincent has died. Virtually everyone else is still available and ready to jump back in and much more talent, ready to come on board.

2015: The latest piece of exciting news is that the brilliant and prolific songwriter, musician and singer Simon Townshend has agreed to let us use one of his original compositions in our growing, multi-hit soundtrack.  Some of Simon's recent gigs include a show stopping forty minute set at the 12-12-12 concert for Sandy Relief at Madison Square Garden, the closing of the 2012 Olympics and the halftime show at the 2010 Superbowl.  Of course, on those stages, Simon was playing guitar and providing secondary vocals for his brother Pete's band, The Who.  On his off nights from the current Who tour of Quadrophenia, Simon performs his own rather innovative and provocative original music in clubs in the United States, Europe and around the globe.

The bit of exciting news that preceded was bringing in the universally known, accomplished and award winning actor, Frank Vincent, to play our defense attorney.  Among his many, many triumphs, Frank was the man who ended up in the trunk of the car for telling Joe Pesci to go home and get his shine box in GOODFELLAS, he repaid the favor to his former comedy partner by burying Joe alive in the Nevada sand in CASINO, and he had his head run over in a New Jersey gas station on the final episode of THE SOPRANOS.

International and award winning film, theater and television star, Kathleen Gati, has also eagerly joined our cast as the mother of one of the alleged perpetrators.  Kathi has appeared in over eighty films and television programs, as well as dozens of theaterical plays, in the United States, Europe and around the world, and she was the recipient of the Hungarian equivalent of an Oscar for Best Supporting Actress in a Film.

Thank you for joining us, Kathi, Frank, Simon, and everyone else who's been coming on board.  We all look forward to working with you!

And of course, we're grateful and excited to have Robin Quivers, who's been Howard Stern's rather luminous and charismatic partner and co-host for the past thirty plus years.  Robin was one of the first performers to come on board, and she will be playing a character that I might have said was tailor written for her if she wasn't based on a very real, rather complex and fascinating, but not quite as charming person.  Gentleman Don Buchwald, who Howard Stern refers to as Super Agent, and who I consider to be one of the most gracious and congenial people I've ever dealt with in this business, has taken a personal interest in the project and has offered us a wide range of experienced actors from his agency.

And then there's the excitement that seems to be forever following our director and co-producer, Sylvia Caminer, as her first two feature length directorial efforts, TANZANIA, A FRIENDSHIP JOURNEY and AN AFFAIR OF THE HEART continue to win awards at major film festivals around the United States and other parts of the world.  AN AFFAIR OF THE HEART is slated to be released on DVD in the coming months.

And we're happy to have Anna Fishbeyn, the writer and star of one of New York's most quirky, original and trendy new plays, SEX IN MOMMYVILLE, as part of our growing, rather diverse cast.

So, that's the latest buzz.  Here's the story:

Renowned producer and Emmy and multi-independent film award winning director Sylvia Caminer enthusiastically signed on to direct and co-produce within a couple of days of first receiving the script.  Additional producers include Dolger Films, a seasoned and experienced group with numerous independent features to their credit, Sophia Ziburtovicz, a former dancer and exhibiting photographer who's dabbled as a theater producer and whose passion for this project has driven her to take her first head on dive into the world of feature films, Joseph Pernice, an enthused and talented emerging and accredited young film maker, Paul Borghese, a seasoned producer, director, writer and actor who has over twenty films to his credit and who spent many years as president of the Italian American Actor's Studio in New York, Eric Zaccar, the writer and lead producer, Nelson Farber, a licensed attorney and passionate and enthusiastic international film and television producer, and Without Hate LLC, the investment vehicle.  Simon Townshend, Mike Boldt, Ruby Faith and Jenn London are among those providing original, soon to be hit songs for the score and soundtrack.  The passionate and brilliant Dara Wishingrad will be doing the production design, which means that every single frame in our film should be a powerful photograph, in itself.

Caroline Sinclair is casting the film, though for now, actors are being brought in by invitation only.  Until the word is put out to the contrary, unsolicited submissions will not be accepted.

To briefly touch on the industry's most frequently asked questions, if all goes according to schedule, principal photography will begin in the spring of 2013.  The exteriors will be shot entirely in Brooklyn, New York.   The interiors, that make up more than fifty per cent of the film, will also be shot in the Brooklyn and Manhattan area.  Production shouldn't take more than thirty five days, and it's unlikely that any single performer would have to work more than ten to fifteen days.  Actors will have low budget SAG contracts.  Additional provisions could be made for selected principals.

If you'd like more information about the script, the budget, the cast, the character breakdowns, or anything else, please E-Mail us and ask.

If you know what's involved in producing an independent feature film, then you know that anyone coming to the table with a reasonable amount of enthusiasm and experience is always welcome.  If you're interested in becoming involved in this project, please

If you'd like to learn more about the story behind WITHOUT HATE, and the stories behind members of our creative team, click on a graphic or link below: